I was thinking last night... with 3s-ge engines not worth that much, could I use any parts from the engine coming out of the new shell to enhance the 3s-gte that will going in? We're talking gen3 3s engines in both cases (in fact both from rev3s).

1) Use the entire GE head on the GTE block

This assumes that the GE head flows better, especially with it's larger lift cams and that is beneficial. It would also come with the bonus of a side feed manifold, negating the tendency of cylinders 2 and 3 to run lean on the GTE manifold. You'd also get the 70mm throttle body compared to the GTE's 60mm. I believe the exhaust manifold will bolt up, making hanging the turbo pretty straightforward still, and using the GTE block would mean there's already an oil feed waiting for the turbo.

The main issue I can see is injectors; the GE uses top feed while the GTE uses side feed, meaning you may not be able to fit the GTE injectors straight onto the GE head.

I had been thinking you would also need to rework the idle control too, as I had thought it simply diverted around the throttle butterfly and would still be injecting pressurized air on the overrun. However, looking at the workshop manual, I think there's a separate ICSV line which could be plumbed into a non-pressurized part of the induction tract.

With bigger lift and duration, the GE cams are often touted as a performance upgrade on the GTE, but I don't think I know of anyone in the UK who's done it. Obviously I'd need to re-shim all 16 valves.

In the past I've also researched the GE manifold as an easy side feed option for the GTE head, and found forum posts suggesting it doesn't bolt up. However the gaskets are the same part number so I still wonder if it will bolt up.

With either plan, although I'd hope to start with a "stock" ECU, to make the most of cams, alongside my GT2860RS an aftermarket ECU is going to become a necessity.

I'm guessing others have thought about all this before... thoughts are welcome

Evidence that someone in the US put a gen3 GE head on on a built GTE bottom end. Don't know much about the build, mind you: http://www.mr2.com/forums/threads/75282 ... m-end-dyno

I also realised I'd screwed up the TB comparison between the GE and GTE versions by comparing a TB diameter with the ID of pipework required. First post is not edited as I think they're the same.

Generally more reading today suggests that a GE head may be more work than it's worth, but cams and manifold may make sense on a GTE.
YouTube - Geek of the Road
Top

Definitely a possibility, although I thought the exhaust ports were different on the GE to the GTE.
Don’t worry about the ISCV. As the valve will be partially closed on the overrun it won’t cause any issues, and connecting pre turbo will give you a small boost leak.
I had my ISCV feed in the intercooler pipework with no issues.
Yep definitely will require a stand-alone ecu (forged pistons while it’s apart too

The more I've looked into it, the more I've been thinking GTE head is still the way to go. As for the components...

Cams: I saw a suggestion that the timings were different between GE and GTE cams and thus I'd need adjustable pulleys to dial them in. I'm not sure I entirely understand what affect extended lift or duration would have on torque / power.

Manifold: The ST205 charge cooler fitment is a really nice feature of the GTE manifold, but the GE side feed would be handy once I can figure out the intercooling. The idea of ACIS on a turbo is interesting too! Fairly easy to undo I'd suggest.

Forging: Yes, I'm increasingly thinking I should get a hone done and drop in some forgies...

shinny wrote: ↑08/03/18 18:45 Cams: I saw a suggestion that the timings were different between GE and GTE cams and thus I'd need adjustable pulleys to dial them in.

Not sure which source you looked at, but the reason/s are discussed here.
https://www.mr2australia.com/mr2play/tm ... 74&mpage=2

In simple terms, increased duration will sacrifice lower end for more at the top.
This article goes into more detail - https://www.mechadyne-int.com/app/uploa ... ssions.pdf

Might be sensible. What max boost level are you planning to run at?
If you're not living life on the edge, you're taking up too much room!

It's one of those things that will snowball in terms of parts / cost I think. Not sure it's worth it (in regards to a GE head swap).
Rev5 Sonic Shadow

I built a 3sge block/3sgte head combo (rev 2). I seriously considered using the 3sge head. There's not much difference in the cams (nothing to consider an upgrade unless you get the gen 6 celica cams which are still a mild upgrade). The combustion chambers and valves are identical. The inlet tracts are different and manifolds not compatible. The 3sge inlet looks like a better flow design and has the acis instead of tvis (changes the volume of the plenum instead of closing certain inlet tracts at low rpm) I think the exhaust manifold bolted up differently. The 3sge has a great top feed fuel rail (you can use it on the 3sgte but you have to cut the mounts off make some new ones - still a great cheap upgrade). The cam belt tensioner is different on the 3sge head (spring type instead of a hydraulic one but is compatible. All in all I'd say putting a 3sge head on 3sgte is not worth it as an upgrade but is do-able if that's what you have.
Top

That's a 20 month bump, but I've had so little time to wrench on my project in that time that I've made almost no progress. I'm currently considering fitting the un-opened 3s-gte for time reasons and then building the 3s-ge block to eventually mate up with a 3s-gte head. My understanding is that the GE block (gen3) would only need the turbo oil feed drilled out to be the same as the GTE block. Is that what you found, Luke?
YouTube - Geek of the Road
Top

No, but that's an interesting idea as it's probably easier and cheaper to find in GE form than GTE form

Way to go I think if you're building a block from an NA, if you're not doing a late 5S. Still doesn't deal with the Cyl2/3 issue, but does deal with that water pump corner. IIRC Lee Dawes had a failure around that area on a 3S block.
Rev5 Sonic Shadow

Way to go I think if you're building a block from an NA, if you're not doing a late 5S. Still doesn't deal with the Cyl2/3 issue, but does deal with that water pump corner. IIRC Lee Dawes had a failure around that area on a 3S block.

Very interesting..I've been looking at many 3s blocks and 5s blocks,so what's the actual issue with that water pump corner?

The area on the corner near the waterpump is squared off and has more material on later blocks. At higher power levels this area can crack from the stress on the head stud. 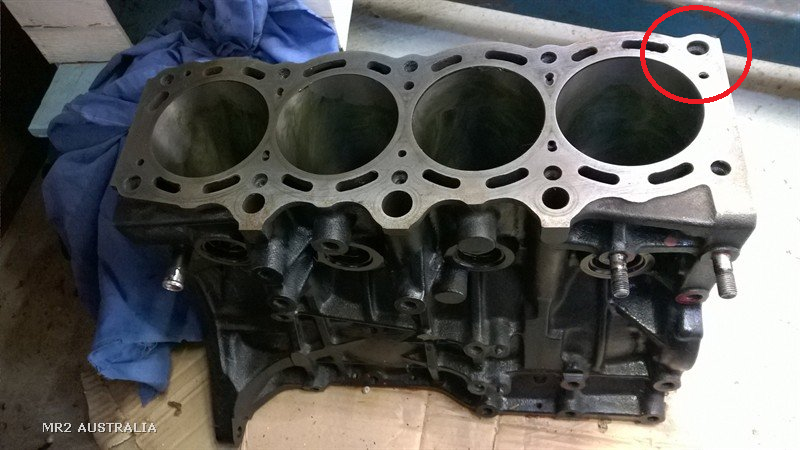 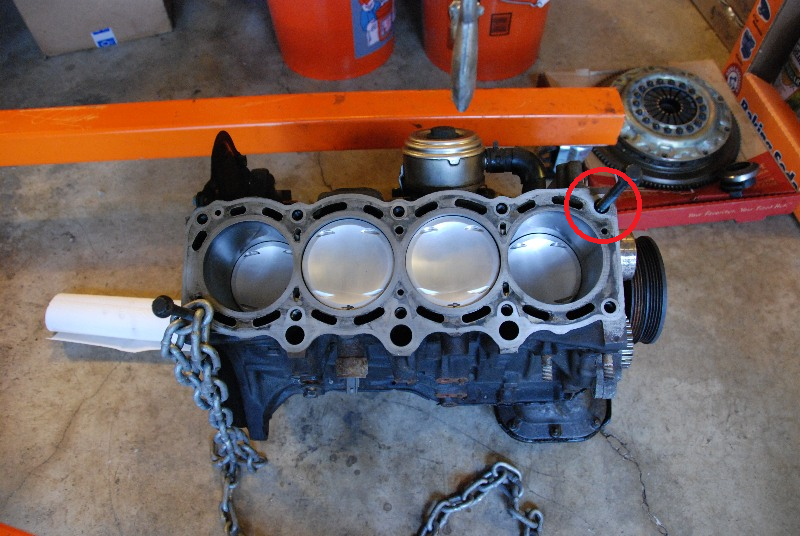 The 2nd image is actually a 5S block, but the revision was the same on both 3S and 5S.
Rev5 Sonic Shadow