) that my boot has sprung a leak.
I've only had the car a couple of months and it's the first time I've noticed it so I don't think it's severe. Might have been there a while, previous owner never mentioned it but he did have covered parking so might never have known. Unfortunately I do not have a garage so she lives round the back of my house next to my other car!

I stuffed rags into all the seals recently and waited for the next downpour - sure enough, one rag was sopping wet - see pic below - can anyone confirm that this is coming from the spoiler seal as I suspect? Is the way to replace these just to undo the bolts, replace and tighten back up?

And then, the real problem that I found just now after removing the boot carpet for drying after this week's rain. I ripped the whole thing out to make sure I wasn't getting any water pooling underneath from the leak I discovered - which I'm not, and the base of the car looks good. BUT I've found a large patch of corrosion on the section between the engine bay and the boot with no obvious source. Again no water pooling but it was wet. Can't see any issues with the boot seal, anyone got any ideas where this is coming from and what I can try to stop I? And treating the corrosion - anything I can do myself here or should I take it to a bodyshop?

As an update, I've just had another look as I'm trying to get to the bottom of it ASAP!

It's an active leak and each time I touch it it's wet and has a concerning 'crunch' to it.

Soooo I've also put my hand round the side (though I can't see round there for obvious reasons) and it feels like there's a bit of corrosion round there too. It's also happening but to a much lesser extent on the other side... 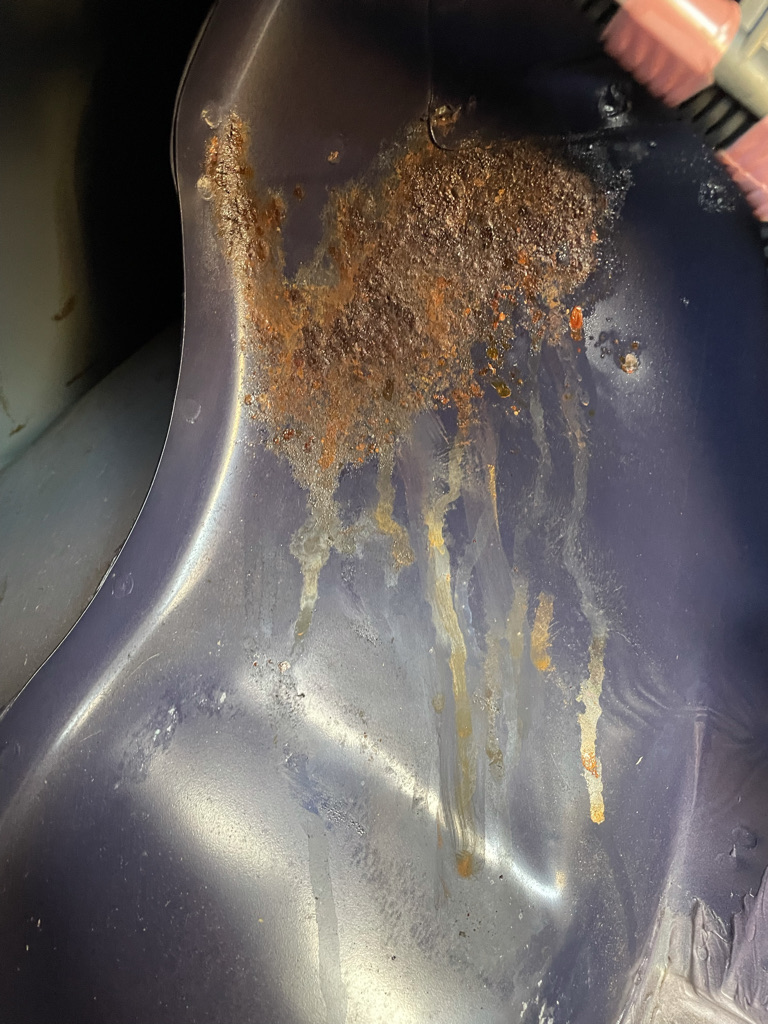 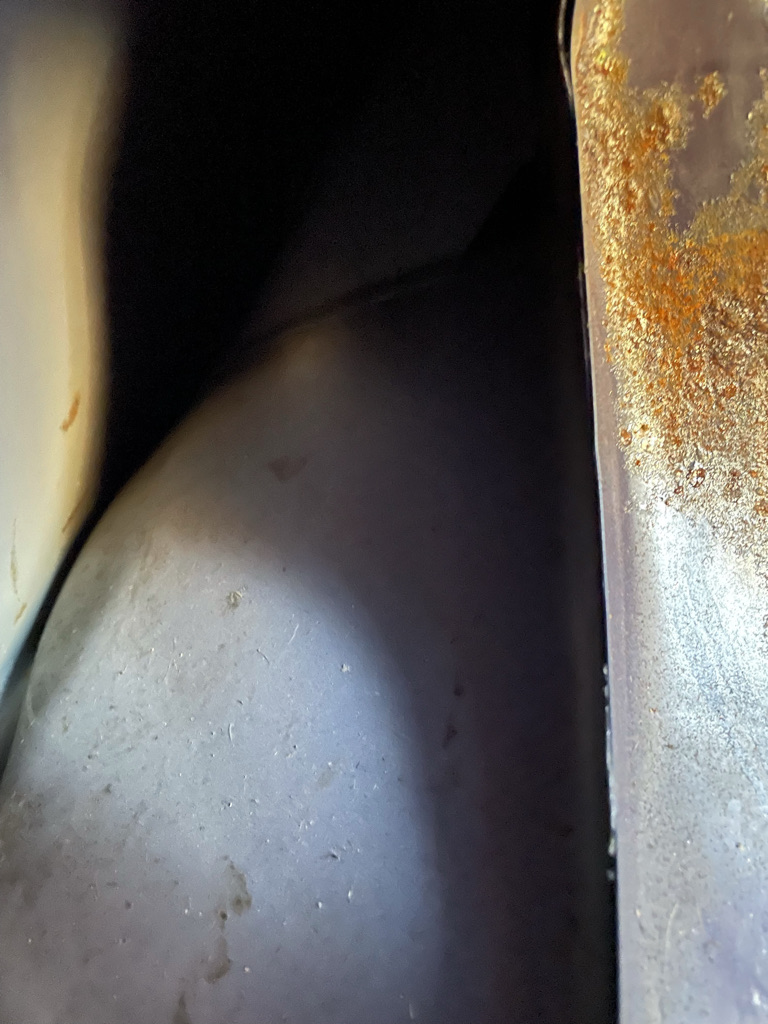 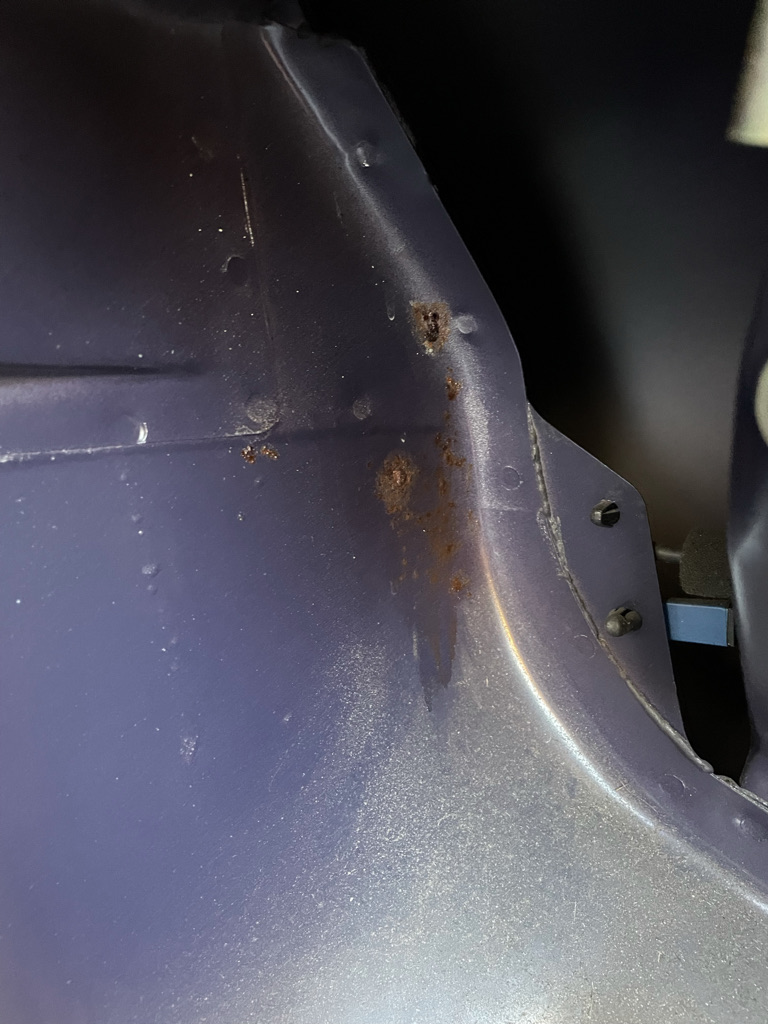 Anyone know how to access behind this area? I've had a look in the engine bay and can't find anywhere obvious that it could be coming from in there. I can't work out what seal would have failed to allow water to get behind there. There's the panel just above the corrosion I thought might be the culprit, but there's only one bolt in it and then it looks like the rest is welded.

I thought it might be these panels next to the engine bay - can these be easily lifted? What's underneath? If nothing is underneath it looks like this might be a 'access from underneath only' job which makes it a LOT harder?? 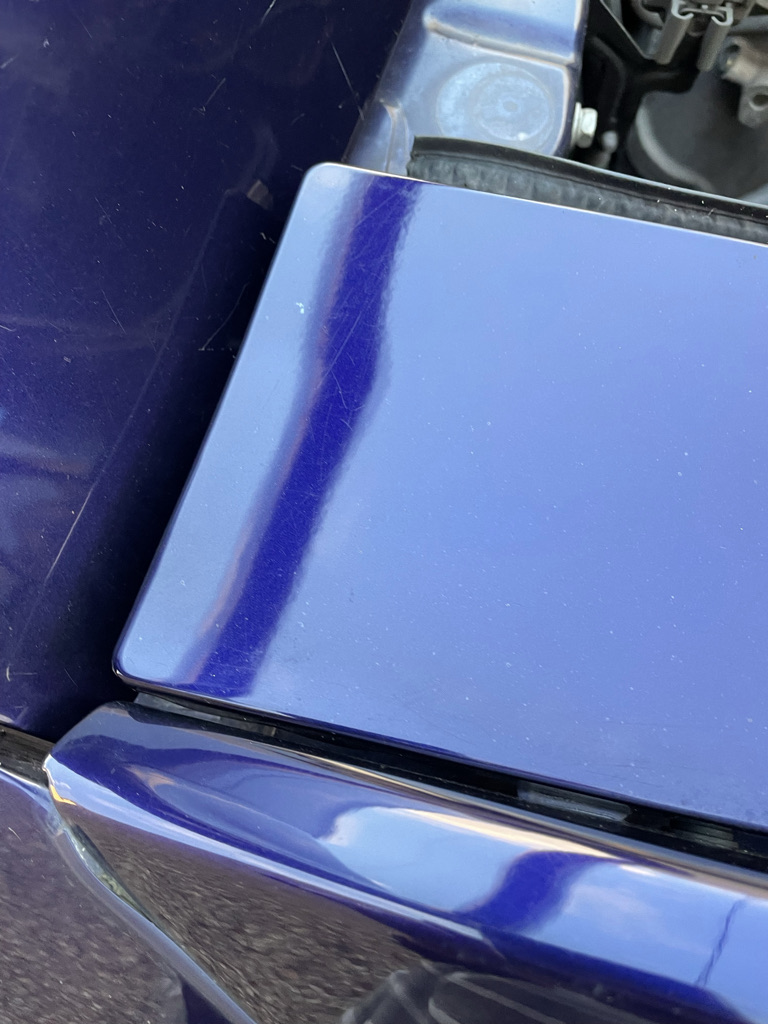 Your pics are to close, can't reference the area's you mean
Black is not a colour ! .... Its the absence of colour

Ah sorry, I thought close up would be helpful.

So here are the leak points - it's been raining today, and there are fresh drips on both. 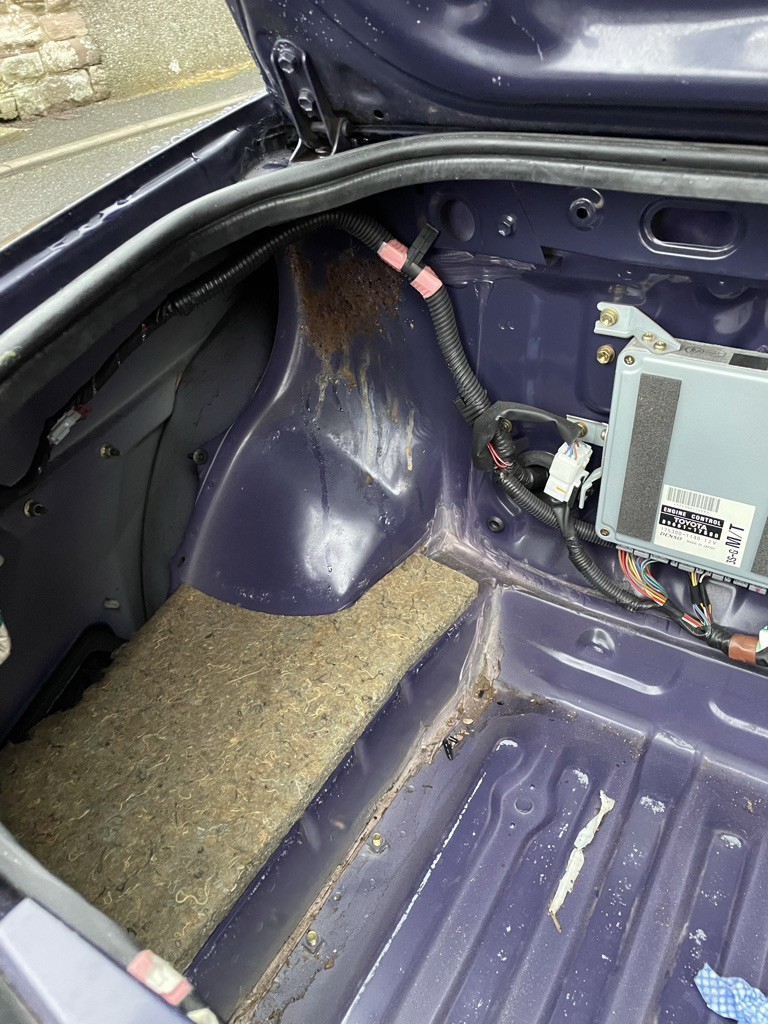 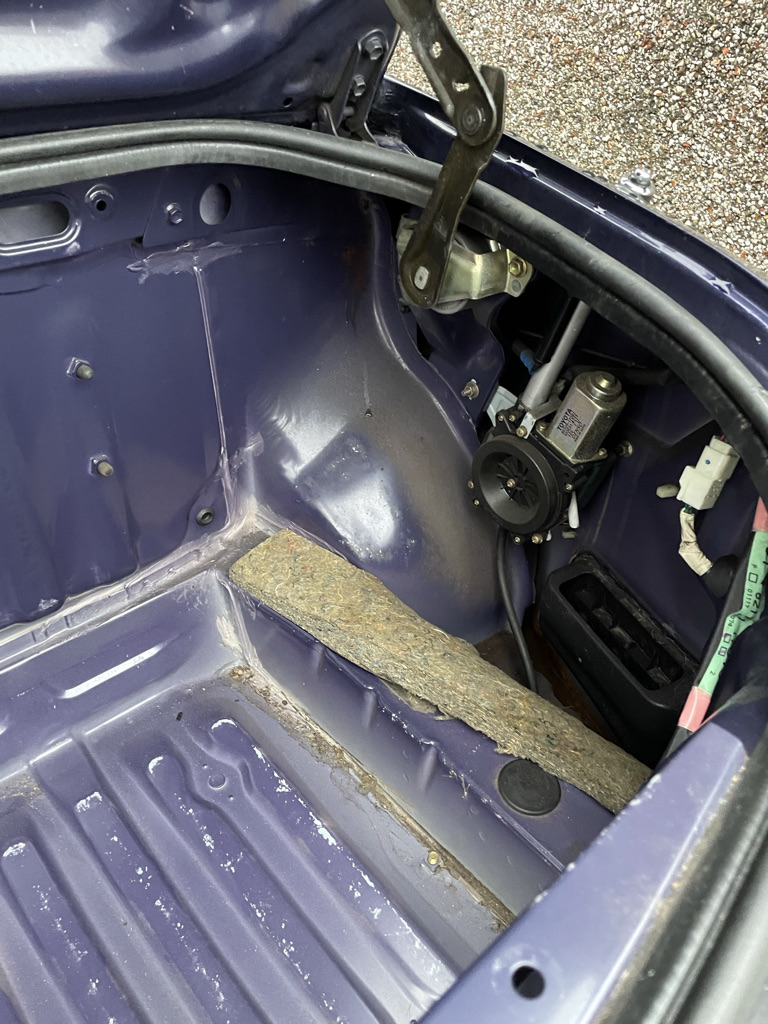 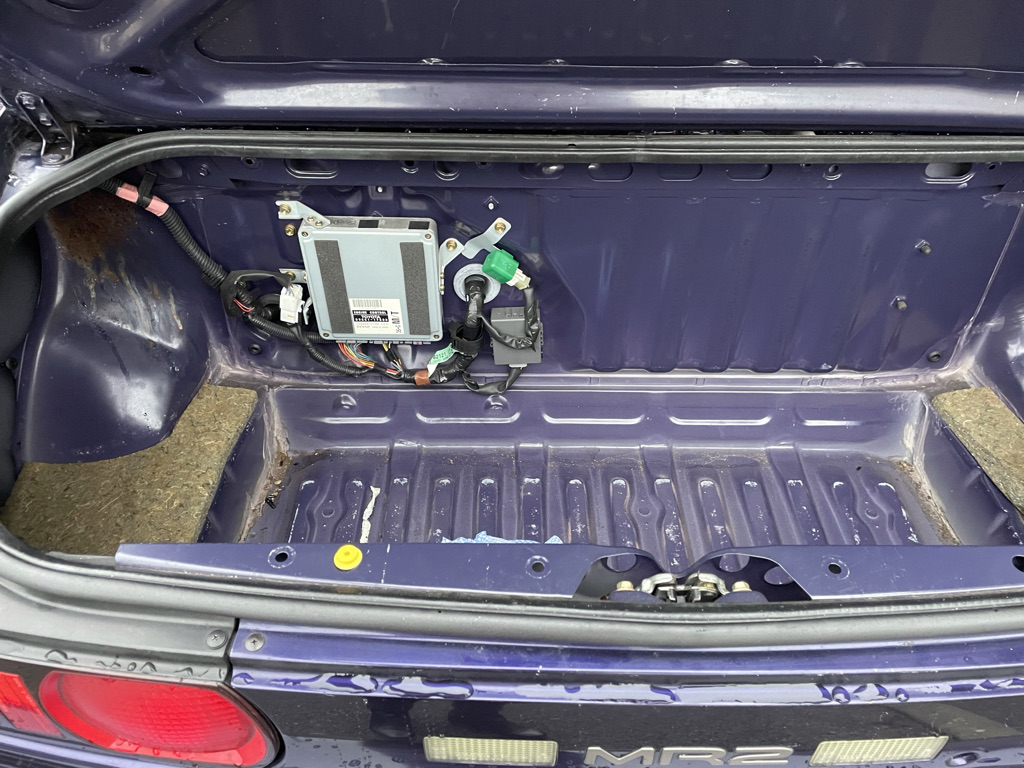 And here is the external area I wondered if it might be the issue - not sure how to get any of the panels off though. 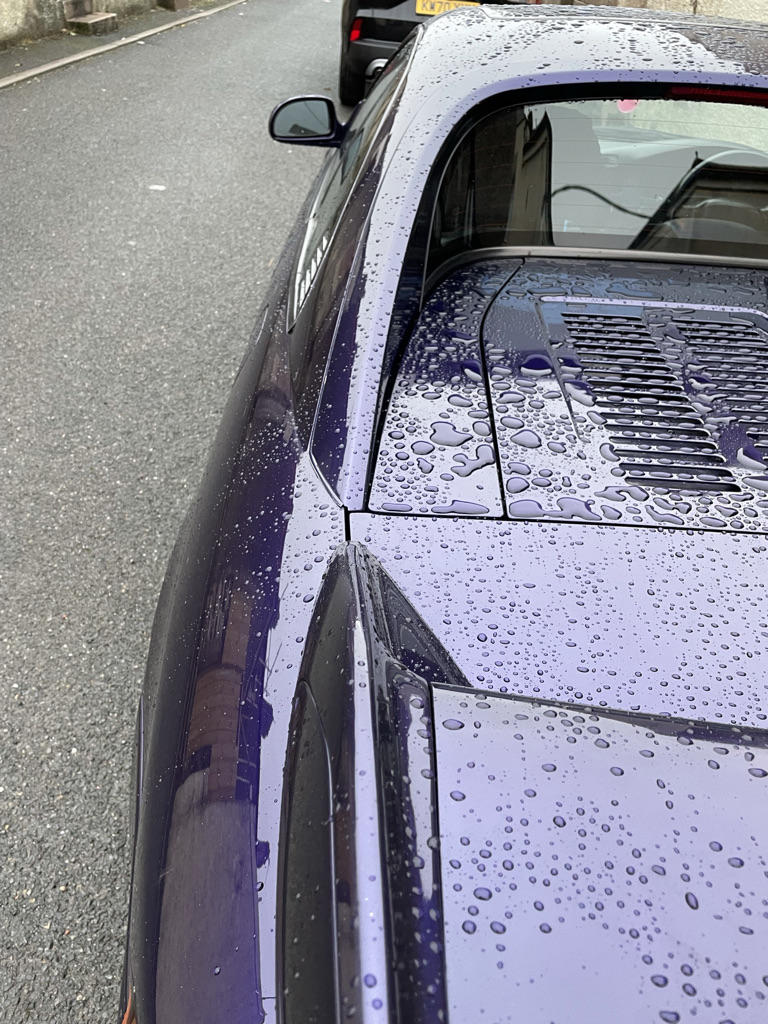 The panels either side of the engine bay lid come off easily, a couple of bolts on either one then they lift off.
Black is not a colour ! .... Its the absence of colour

Get a hose pipe or jug of water, left the boot lid and poor water around the outside of the seal and check where is dripping from. That area should all be water tight even with the boot open.

Usual leak spots are arieal, spoiler mount seals, boot hinges and possibly any other bolts that have been removed in the past and maybe not sealed back up.
Top

Thanks, I’ll try that when I’m home from work tomorrow (far too dark to do anything else useful!).

Yeah that’s my main worry too, no obvious seals that could be the issue (still need to change my spoiler seals for the other leak…). The way it looks now is that it seems to be coming THROUGH the metal rather than dripping onto it, but hopefully pouring water on it will reveal the issue.

At least it seems to be on the interior boot part rather than on the actual car shell!
Top

Yeah that's what made me think its coming from a drip

keep us posted on your progress

Update: I've just been out and poured water round the area and... nothing.
There's no drips coming in when I do that, and when I put my hand round the back of the area (tried to illustrate below) it feels damp but not wet. Same on the less bad side. I can't feel directly behind the corrosion patch though, as there's a 'side' to this panel, so I don't know where this part of panel actually backs into? I don't think it's directly into the engine bay as I've looked at that already. 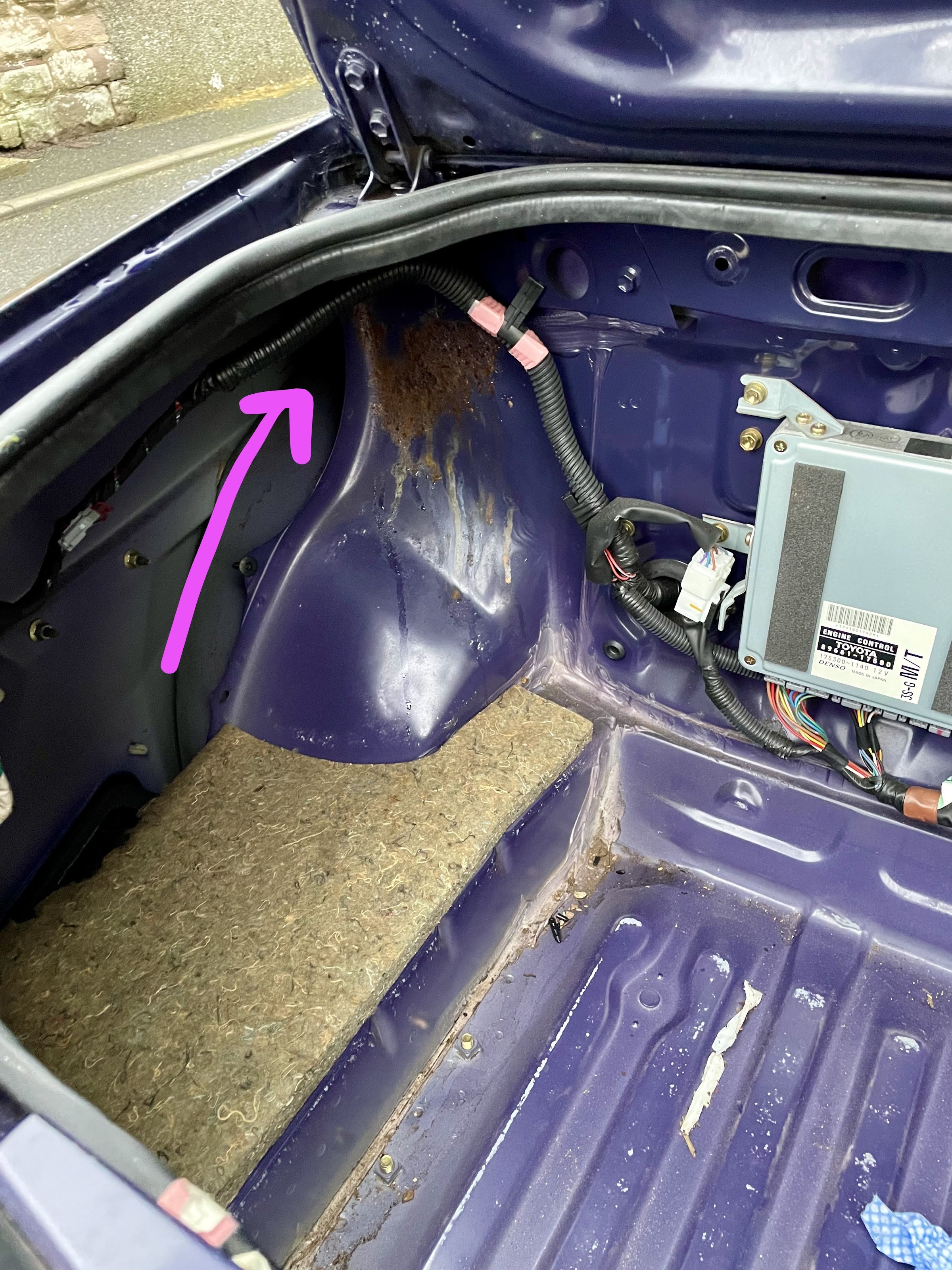 I'm thinking maybe water is getting under one of the body panels and behind the boot, and then over time has corroded through this patch of metal, hence the very rusty 'drips' coming through? The centre bit of the bigger patch of corrosion is really crusty so I think it's gone all the way through. Luckily not on the main body of the car of course but it'll only get worse (and keep my boot nice and damp) if I leave it.

It's behind the bit where the boot liner usually is so this could have started years ago (and for it to be that bad I think it did!) :(

I haven't had the small panels either side of the engine bay off yet as the weather is dreadful... but I don't know if its these or one of the side panels, I can just about see under those small panels and it doesn't look like that are is where they lead. I'm tempted to take it in to a bodyshop and ask them to have a look behind a couple of the panels - or my normal garage, they were really good when I took it in for its service/belt change but not sure boot leaks is their expertise.
Top

Ok another update because I've just been out again (couldn't resist - now I am very soggy, love October in the UK).

Put my hand back 'up and round' behind the corroded bit and found a perfectly round hole I assume was meant as some kind of ventilation? Now I'm fairly sure what's happening is water is getting in via the gaps between rear panels (highlighted suspect panel in pic below), getting in that hole and pooling behind the corroded patch. And the same the other side to a lesser extent.
Does that sound plausible?

The second question is what do I do?? The panel looks like it's welded to the rear part of the car so I'd be pulling the car half apart to find the exact spot and do a proper fix. Can you get body panels like this resealed (that sounds like a really daft question, you can tell this is my first car older than 5 years) and then have that corrosion treated?

I don't want it to get worse but I also don't want to spend more than it's worth spending on it.
Top

Looking at a picture of Sky which is currently getting the full treatment it looks like perhaps it's actually inside the wheel arch. As you said it would probably need to be a body shop to do the work.

Also just been in the garage to check on mine, if its that bad I would see if you can poke a small screw driver though and then you'll likely be able to see it on the underside of the wheel arch
You do not have the required permissions to view the files attached to this post.

I've just been out to check. Isn't the top of the wheel arch this bit? 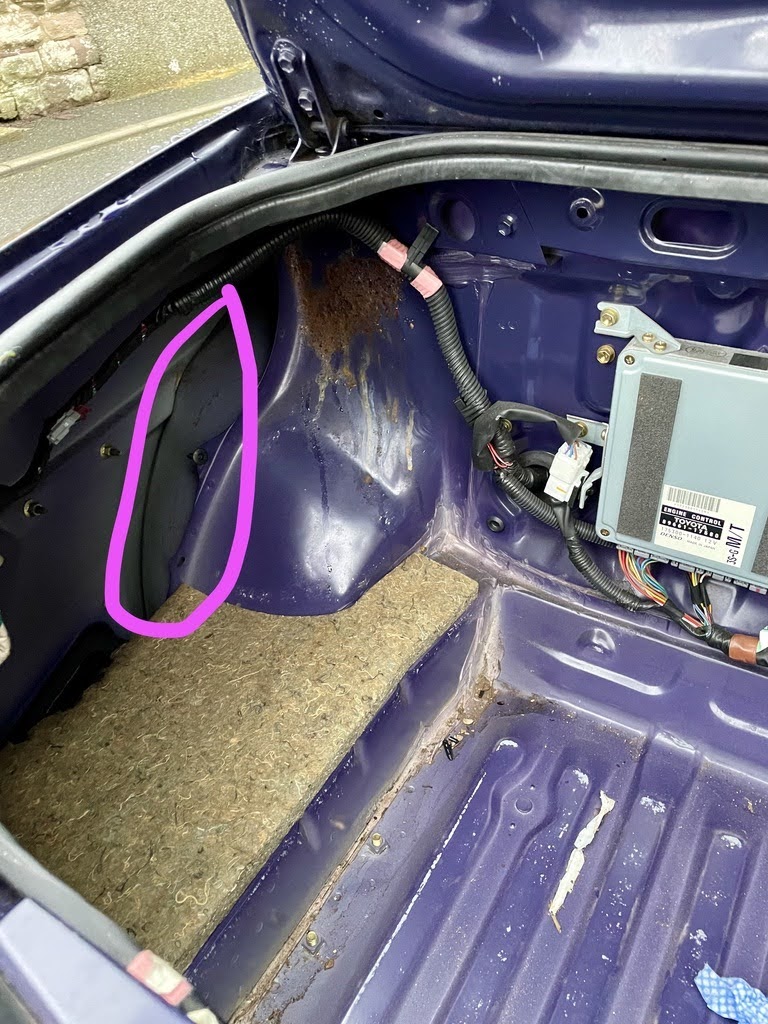 I haven't tried to poke anything through the corrosion yet - I'll see if I've got any thin wire to do this with when it's light and not pouring with rain. I did shine a torch up into the wheel arch though and I can't see any corrosion. My garage commented on how clean and tidy underneath she was when she went in for a service so I'm really hoping its NOT the arch.
It just seems to be into a weird void between the boot and the engine bay. The side is still damp which isn't surprising as its pouring with rain but I still can't find a source of full on drips rather than moisture (hope that makes sense!).
I'd love to pinpoint the leak before it goes in a body shop so they don't end up having to spend loads of time doing it themselves and billing me for it!
Top

From looking at mine I’m 95% it’s the top back of the inner wheel arch, doubt the garage would have spotted it because it will be behind the rear suspension strut and will be covered in under seal no doubt.

If you look on the picture I posted you can see two dark grey lines on the left, the part of the arch you highlighted does continue lower but the part that’s rusted is the straighter bit at the rear of the strut.

I wouldn’t expect it would be an expensive repair as no colour matching would be needed, just cut out the area welled in a bit of metal and primer over it. There is stuff available that you can paint over rust that converts it but if water is already coming though I’m not sure it would stop it.

Also while we’re on this subject you should check the sponge has been removed from either side of the inner sills. You can check this by removing the side panels behind the seats and shining a torch down. If they are still in I’d recommend removing them and spaying some anti corrosion stuff down there.

Ok thanks for looking for me! I’ll have another look tomorrow when it’s light and then it might be body shop time. There’s a spot near me that specialises in restoring really old cars which is meant to be really good, albeit expensive. Then again if it’s just cut and weld and no making it look good then maybe it can just go back to my normal garage.
So if it is the wheel arch it’s probably just water coming in from the bottom over time right, rather than a leak path?

But yeah I think it needs a full fix rather than anti rust stuff at this stage, water isn’t pouring in but it’s enough to make the foam and boot carpet on that side damp.

I still need to change the seals under the spoiler too. Maybe I’ll ask the garage nicely to do that for me too, I’ve got replacement seals but the weather is not good for standing outside with the boot open!

Thanks for the advice on the sills, I’ll have a look - I know the sills and the majority of the wheel arches have been treated in the past so fingers crossed this little patch is the only problem. I did notice a small patch of corrosion (but not wet) right down the side of the boot earlier - past the wood/foam on one side (I should have taken a pic really). Looks superficial, but probably also worth treating. Any recommendations on good stuff to use?
Top
Post Reply
28 posts